Sandra Djwa is a biographer, critic and textual editor. She has written important biographies of F.R. Scott and Roy Daniells and published editions of E.J. Pratt's poems. Born in Newfoundland on April 16, 1939, she came to British Columbia in 1958 and obtained her Ph.D. in English at the University of British Columbia in 1968, when the department was overseen by Roy Daniells. She was then appointed Professor of English at Simon Fraser University. She was Chair of the English Departmentbetween 1986 and 1994.

Her biography of F.R. Scott, The Politics of the Imagination: A Life of F.R. Scott was shortlisted for the Hubert Evans Prize in 1987. It was translated as F.R. Scott: Une Vie and short-listed for the Governor-General's Award in French Translation in 2002. Her biography of Roy Daniells, Professing English: A Life of Roy Daniells was awarded the Lorne Pierce Gold Medal for literature from The Royal Society of Canada in 2002. She also edited the memoirs of Carl F. Klinck, editor of The Literary History of Canada and delivered a keynote address on Klinck at a one-day symposium in conjunction with the launch of this book, Giving Canada A Literary History: A Memoir by Carl F. Klinck in 1991. She was also Klinck's literary executor. The first woman to write the review of the year's work in "Poetry" for the University of Toronto Quarterly she was also, in 1973, co-founder of ACQL, The Association for the study of Canadian and Québec Literatures. Sandra Djwa was the second graduate of UBC, and the first woman, to deliver the Garnett Sedgewick Memorial Lecture at UBC in 1999 in honour of the department's 80th anniversary. 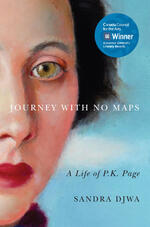 Journey with No Maps 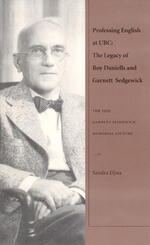