The lives of many lesbians who grew up before 1965 remain cloaked in mystery. Historians have illuminated the worlds of upper-middle-class “romantic friends” and working-class butch and femme women who frequented lesbian bars in the ’50s and ’60s. The majority of lesbians, however, were lower-middle-class women who hid their sexual identity by engaging in discreet social and sexual relationships.

Drawing on correspondence, interviews, journals, and newspaper articles, Awfully Devoted Women offers a nuanced portrait of the lives of middle-class lesbians in the decades before the gay rights movement in English-Canada. Accounts and explorations of these women’s sexual practices, thoughts on same-sex desire, and relations with friends and family unveil a world of private relationships, house parties, and discreet social networks. This intimate study of the lives of women forced to love in secret not only challenges the idea that lesbian relationships in the past were asexual, it also reveals the courage it took for women to explore desire in an era when they were supposed to know little about sexuality.

Awfully Devoted Women is the first book-length study of lesbian sexuality, relationships, and community in Canada before 1965. It will be of interest to students and practitioners of Canadian history and women’s studies and to anyone interested in the history of sexuality. 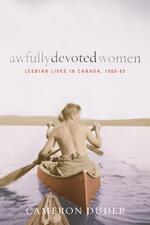