Lorena Gale
Born in Montreal, Lorena Gale was an award-winning actress, director and writer. Her first play, Angélique, had its American premiere at the Detroit Repertory Theatre, and in New York, Off Broadway at Manhattan Class Company Theatre, where it was nominated for 8 Audelco Awards. Her most memorable stage performances include Normal Jean in The Coloured Museum, and Hecuba in Age of Iron at the Firehall Theatre, for which she received both a Jesse Richardson Nomination and Award.
She was the author of Je me souviens, published by Talonbooks in 2001. Je me souviens was nominated for three Jessie Richardson Awards in 2000: Best Actress, Best Direction and Best Production.
Lorena passed away in 2009. 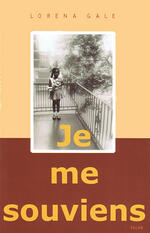