From the 1870s until the Great Depression, immigration was often the question of the hour in Canada. Politicians, the media, and an array of interest groups viewed it as essential to nation building, developing the economy, and shaping Canada’s social and cultural character. One of the groups most determined to influence public debate and government policy on the issue was organized labour, and unionists were often relentless critics of immigrant recruitment. Guarding the Gates is the first detailed study of Canadian labour leaders’ approach to immigration, a key battleground in struggles between different political factions within the labour movement.

Guarding the Gates provides new insights into labour, immigration, social, and political history. It will be valuable not only to readers interested in the internal politics of social movements, but to everyone concerned with long-standing debates about Canadian national identity, and gender, ethnic, and race relations. 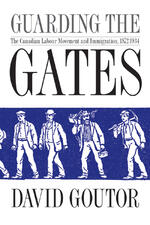