Douglas L. Hamilton was born in Washington, DC, and received his MA in history from the University of California, Riverside. After a brief vacation to British Columbia in the early 1970s, he moved to the Gulf Islands to farm.

Soon after, Hamilton began writing history pieces for magazines, and his stories have appeared in Pacific Yachting, Canadian West, and True West. He has also contributed to the three most recent volumes of Raincoast Chronicles. Hamilton has covered such diverse topics as the smallpox epidemic of 1862, the Pig War, rum-running, Typhoon Frieda, and the submarine attack on Estevan Lighthouse.

Hamilton lives on Lasqueti Island with his wife and her harpsichord, three cows, four sheep and a flock of chickens. 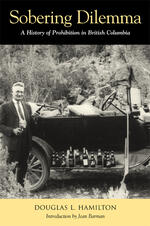