Charles Yale Harrison was born in 1898 in Philadelphia. He left school in grade four, and at the age of 16 began writing for the Montreal Star. Before long, he joined the Royal Montreal Regiment and fought as a machine-gunner in France and Belgium. He was wounded at Amiens in 1918 and returned to Montreal. Harrison worked as a theater manager and reporter before moving to New York City, where he earned his living as a public relations consultant, radio commentator, and writer. 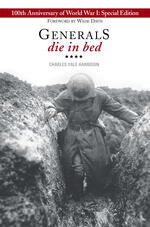