Robert Hunter, named one of the ten eco-heroes of the 20th century by Time magazine, is a writer, broadcaster, and speaker on the issues of the environment and climate change. He won a Governor General's Award for his 1991 book Occupied Canada. Robert Hunter passed away in 2005 at the age of 63 years. 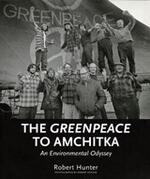 The Greenpeace to Amchitka