Now 22 years old, Mariatu Kamara has been named a UNICEF Special Representative for Children in Armed Conflict; a Voices of Courage Honoree by the Women’s Commission for Refugee Women and Children; and has established The Mariatu Foundation, which aims to offer much needed refuge to the ongoing victims of the civil war in Sierra Leone. A documentary about child victims of war, featuring Mariatu, is in the works. 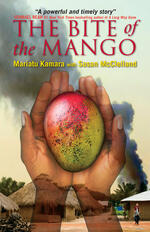 The Bite of the Mango