Zachariah Kay has taught at several universities across Canada and was an elected member of the Executive of the Canadian Political Science Association. He served as Chief, Liaison and Research, Education Support Branch, Department of the Secretary of State, Ottawa, and latterly as a consultant to the Departments of Secretary of State, National Health and Welfare, and External Affairs. Prior to retirement he was a fellow and senior research associate at the Leonard Davis Institute for International Relations of the Hebrew University of Jerusalem and a founding member of the Israel Association for Canadian Studies. He is the author of many publications for the federal government, academia, and newspapers in Canada and Israel. His major academic works include Canada and Palestine: The Politics of Non-Commitment and The Diplomacy of Prudence: Canada and Israel, 1948-1958. 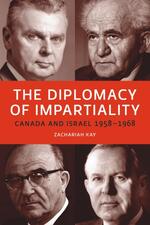 The Diplomacy of Impartiality