David Lester is a musician, graphic designer and graphic novelist. His most recent book is Prophet Against Slavery: Benjamin Lay, A Graphic Novel (Beacon Press) created with Marcus Rediker and Paul Buhle. He also illustrated “1919: A Graphic History of the Winnipeg General Strike”, (published in English, German and French editions). 1919 was co-winner of the 2020 CAWLS Book Prize. Lester’s poster of anti-war protester Malachi Ritscher was exhibited at The Whitney Museum of American Art in New York. He is guitarist in the rock duo Mecca Normal, cited as an influence on the founders of the feminist social movement Riot Grrrl. He lives in Vancouver, Canada. 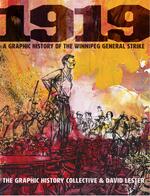