In 1968, Canadians dared to take a chance on a new kind of politician. Pierre Trudeau, a relative newcomer to federal politics, became the leader of the Liberal Party and prime minister that April. Within two months, he led the Liberals to victory in a snap election. His meteoric rise to power was driven by Trudeaumania, an explosive mix of passion and fear fueled by media hype and nationalist ambition. Exhilarated crowds greeted his appearances across the country. He became a sex symbol whose image was burnished by the star-making machinery of posters, fashion, and hit songs.

What exactly was going on in Canada in 1968? And did it matter?

This book is the definitive account of Trudeaumania. Combining a lively narrative with images reflecting the rich visual culture of the times, Paul Litt’s carefully considered cultural history traces what happened when the fabled spirit of the sixties – human rights, ban-the-bomb, Vietnam, sex ‘n’ drugs ‘n’ rock ‘n’ roll, psychedelia, the counterculture – met the excitement of the Centennial and Expo 67. Canadians wanted to modernize their nation, differentiate it from the United States, and thwart the threat of Quebec separatism. Within this charged setting, Trudeau was seen as a transformative figure who would rejuvenate the nation in keeping with the idealistic hopes of the times.

Litt’s evocative account of the times shows that the mania that swept Canada fifty years ago was not just a sixties crazy moment. It was a passionate quest for a new Canada that would define the values of Canadians for decades to come. 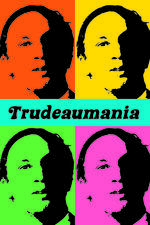