Linda Little's life has been unlike Jackson Bigney's in nearly every way. She grew up on a small farm in Hawkesbury, Ontario, and studied at Queen's University in Kingston and at Memorial University in St. John's. After a few months in English Harbour, on Trinity Bay, she moved to a small farm near River John, Nova Scotia. Like Jackson, she found she had little taste for farm chores; she quit raising cows and now keeps only pigs, chickens, and turkeys during the summer. Like Jackson, she, too, is a terrible fiddle player -- so terrible that she has been known to use her rendition of "Skye Boat Song" as revenge. Since childhood, Linda Little has been fascinated by the emotional life of men, especially the tenderness between comrades, both real and fictional. She has found these intense feelings all the more compelling because they are usually concealed and seldom glimpsed by others and has built much of her fiction on the exploration of what lies behind these moments. Strong Hollow is Linda Little's first novel. Her short fiction has previously appeared in literary journals and anthologies, including Descant, the Antigonish Review, and The Journey Prize Anthology. 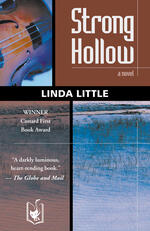