Since the early days of the fur trade, wildlife has been powerfully and inspiringly emblematic of Canada. Yet the story of saving Canada’s wildlife is largely unknown. States of Nature is one of the first books to trace the development of Canadian wildlife conservation from its social, political, and historical roots. While noting the influence of celebrity conservationists such as Jack Miner and Grey Owl, Tina Loo emphasizes the impact of ordinary people on the evolution of wildlife management in Canada. She also explores the elements leading up to the emergence of the modern environmental movement, ranging from the reliance on and practical knowledge of wildlife demonstrated by rural people to the more aloof and scientific approach of state-sponsored environmentalism.

Illustrated with evocative images of the Canadian wilderness of yesteryear and supported by historical case studies, States of Nature will appeal to historians, policy makers, and wildlife managers, as well as to general readers fascinated by the natural world and its champions. 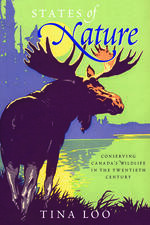