The 1950s were the golden years of haute couture, captured by iconic images of glamorous models wearing dramatic clothes. Yet the real women who wore these clothes adapted them to suit their own tastes, altered them to extend their life, and often could not bear to part with them long after the dresses had outlived their use. This gorgeously illustrated book demonstrates why so many of these designs are still in existence and why we are fascinated by them fifty years later.

Couture and Commerce investigates how and why 1950s couture fashion was important in its own day. The Paris couture houses survived after the Second World War due to the enthusiasm of the North American fashion press and commercial buyers. Alexandra Palmer traces the European haute couture trade in North America by following actual examples of surviving couture dresses from the design house sketch, through the model used in New York and Toronto fashion shows and as a template for copies and knock-offs, and finally to the consumer.

Couture and Commerce is a remarkable mixture of accessible text, colour photographs of the original garments, design house sketches and photographs, retailers’ advertisements, and society page images of socialites wearing the couture designs. Weaving together analysis of the clothes and interviews with those who traded, sold, and wore couture, Alexandra Palmer vividly recreates the 1950s fashion world. 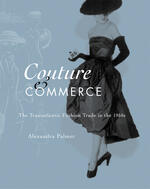