In 1990, Gerald Conaty was hired as senior curator of ethnology at
the Glenbow Museum, with the particular mandate of improving the
museum’s relationship with Aboriginal communities. That same
year, the Glenbow had taken its first tentative steps toward
repatriation by returning sacred objects to First Nations’
peoples. These efforts drew harsh criticism from members of the
provincial government. Was it not the museum’s primary legal,
ethical, and fiduciary responsibility to ensure the physical
preservation of its collections? Would the return of a sacred bundle to
ceremonial use not alter and diminish its historical worth and its
value to the larger society? Undaunted by such criticism, Conaty
oversaw the return of more than fifty medicine bundles to Blackfoot and
Cree communities between the years of 1990 and 2000, at which time the
First Nations Sacred Ceremonial Objects Repatriation Act
(FNSCORA)—still the only repatriation legislation in
Canada—was passed. “Repatriation,” he wrote,
“is a vital component in the creation of an equitable, diverse,
and respectful society.”

We Are Coming Home is the story of the highly complex
process of repatriation as described by those intimately involved in
the work, notably the Piikuni, Siksika, and Kainai elders who provided
essential oversight and guidance. We also hear from the Glenbow
Museum’s president and CEO at the time and from an archaeologist
then employed at the Provincial Museum of Alberta who provides an
insider’s view of the drafting of FNSCORA. These accounts are
framed by Conaty’s reflections on the impact of museums on First
Nations, on the history and culture of the Niitsitapi, or Blackfoot,
and on the path forward. With Conaty’s passing in August of 2013,
this book is also a tribute to his enduring relationships with the
Blackfoot, to his rich and exemplary career, and to his commitment to
innovation and mindful museum practice. 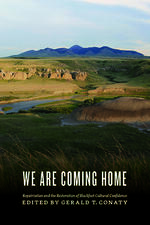 We Are Coming Home

Looking Reality in the Eye