A gift from the Creator – that is where it all began. The game of lacrosse has been a central element of many Indigenous cultures for centuries, but once non-Indigenous players entered the sport, it became a site of appropriation – then reclamation – of Indigenous identities. Focusing on the history of lacrosse in Indigenous communities from the 1860s to the 1990s, The Creator’s Game explores Indigenous-non-Indigenous relations and Indigenous identity formation. While the game was being stripped of its cultural and ceremonial significance and being appropriated to construct a new identity for the nation-state of Canada, it was also being used by Indigenous peoples for multiple ends: to resist residential school experiences; initiate pan-Indigenous political mobilization; and articulate Indigenous sovereignty and nationhood on the world stage.

The multilayered story of lacrosse serves as a potent illustration of how identity and nationhood are formed and reformed. Engaging and innovative, The Creator’s Game provides a unique view of Indigenous self-determination in the face of settler-colonialism. 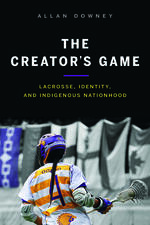